Cremation or burial is not something a new parent should think about. Sadly, for some of us, it is a reality. My husband is self-employed, and in the past, we had the privilege of living wherever the wind blew us. We joke that all four of our children were born in different states. No joke. Lucky for us, we have called beautiful Colorado home for over 10 years. We decided to have Maddux cremated. I could not bear the thought of having to move, and being forced to leave Maddux behind.

After Maddux died, and during the time of his autopsy, came the decisions of funeral homes. How much? Were they credible? Would they treat him well? When would they pick him up? I wanted to personally drive to every funeral home and “interview” the man in charge. Luckily, my husband put his foot down and said NO. He took it upon himself to find the “right” person. Mike was able to make the arrangements over the phone and by fax. Of course, I’m not too happy about this decision. Remember I wanted to personally interview. But, looking back now, this was the best choice for me, for us.

I had looked online for cremation urns. How I hated the word urn back then, and still do today. And trust me, I looked high and low for the perfect urn. Nothing was right. I did not see anything I even remotely liked or wanted. This was a very important decision for me. I was looking for a “resting place” for my son! One of the only decisions or choices I will ever be able to make for him as his mother. This had to be perfect. Not just for him, but for me as well. I did not take this task lightly.

We picked up Maddux on February 17th, 2005. I remember the kids were out of school. We drove to Erlinger Funeral Home in Lafayette, Colorado. The director’s name was Carl Erlinger. He was an incredible and compassionate man. He asked us if we wanted an urn to put Maddux in, and we said yes. He showed us all of what he had. Not a large selection, but again, the same that I was seeing over the internet. Alphabet blocks, teddy bears, and baby shoes. I didn’t see anything I wanted and didn’t want something to just tide me over. I didn’t want to have to “transfer him”. So, we took Maddux home with us in a little plastic bag that was placed into a burgundy velvet bag with gold tassels. Each of us took turns holding his ashes on the drive home.

So, I continued my search … Now it was time to “think out of the box.” I looked online at china stores. I looked at sterling silver vases. I looked at Lladro figurines. I found some beautiful pieces here. Especially the ones titled: my guardian angel and heavenly slumber. I drove to several stores looking at them. They were perfect. The only thing wrong was that there was no opening to insert Maddux’s ashes. Mike said he could just drill a hole at the bottom. Then someone suggested we could take a figurine to a jeweler. I am a huge antique mall/thrift store shopper and proud of it. One day I was driving by an antique mall and decided to go in and walk around. I found this cute little ceramic figurine of a boy kneeling in prayer with a teddy and a Bible in front of him. There was no bottom to the piece. This would be perfect, I thought. Mike could make a bottom. I did not let the $3.00 price tag steer me away, thinking it was too cheap for my son. I bought it, brought it home, and on the shelf it sat.

The next week, I was driving Chase to a baseball lesson. I had an hour to kill, and there was another little antique mall close by, so I drove there. I was in there for probably 15 minutes, when near the front I saw it. Exactly what I was looking for. The maker is Royal Doulton and the figurine is called “Family”. Better yet, there was a hole in the bottom. All we had to do was figure out how to seal it. Again, I bought it and brought it home. And again, put it on the shelf. It took me almost two years to transfer his ashes to this figurine. I can’t tell you why. I just wasn’t ready or emotionally prepared to do it. I can tell you now I find my situation almost crazy comical.

Here is a paragraph from my journal:

I grabbed the velvet bag that had been on the shelf for so long, grabbed the figurine, a large Ziploc baggie, and a wooden spoon with a long handle. I locked myself in the downstairs bathroom, so none of my kids would know what I was doing … and started. First I folded the Ziploc baggie and fit most of it into the small opening at the bottom of the figurine. Then I stuck the handle of the wooden spoon into the opening to make it easier to funnel his ashes into. I used the Ziploc just in case the ceramic figurine ever got broken. His ashes would be protected, and would not spill out. Could you just imagine? People call me crazy now. I opened the plastic bag and looked at his ashes. I had done this before, but this time I looked at them really closely. I picked out pieces and examined what was left of him, touched what was left of him, and smelled him. I held him to my heart and thought of what should have been and cried fresh tears. But somehow these tears were more cleansing than breaking.

I can laugh now when I say, “you should have been there” or, “I should have taken a picture.” Seriously, how can you take a picture of something like that? There you have it, a crying crazy lady getting ready to pour her son’s ashes into this tiny opening. So, with all of that being said, this is what we have decided to use as our son’s resting place. 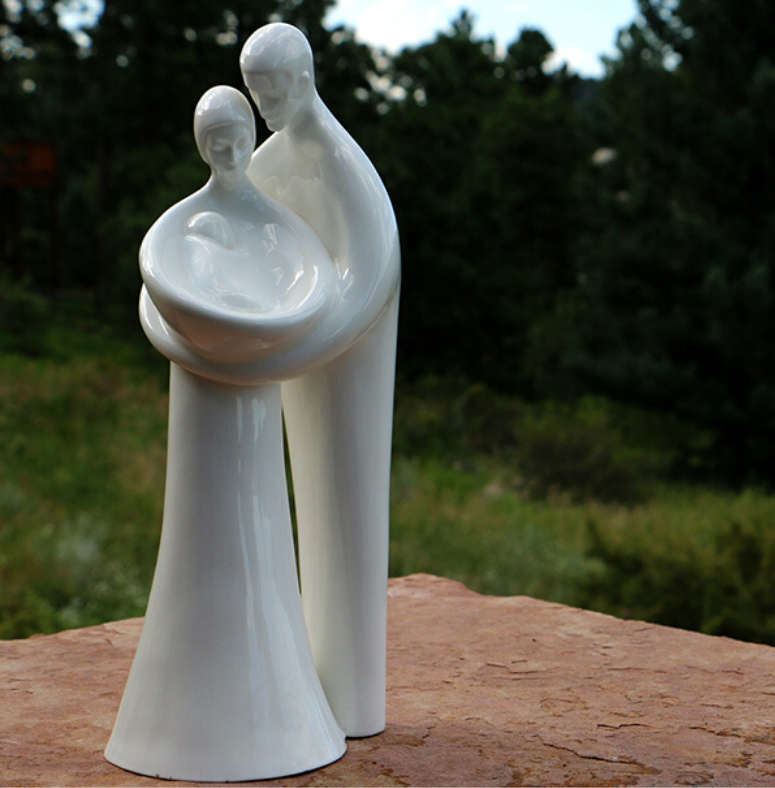 Instead of an Urn, I call it his ‘Little Angel Haven.’ I love this figurine. It reminds me of our photographs we had done with Sandy. Where Mike and I are together and Maddux is cradled in my arms. We chose not to have a memorial service for Maddux. Mike and I have always thought and said, “that night with Sandy and her camera was our memorial to Maddux. That was how we chose to honor our son.” 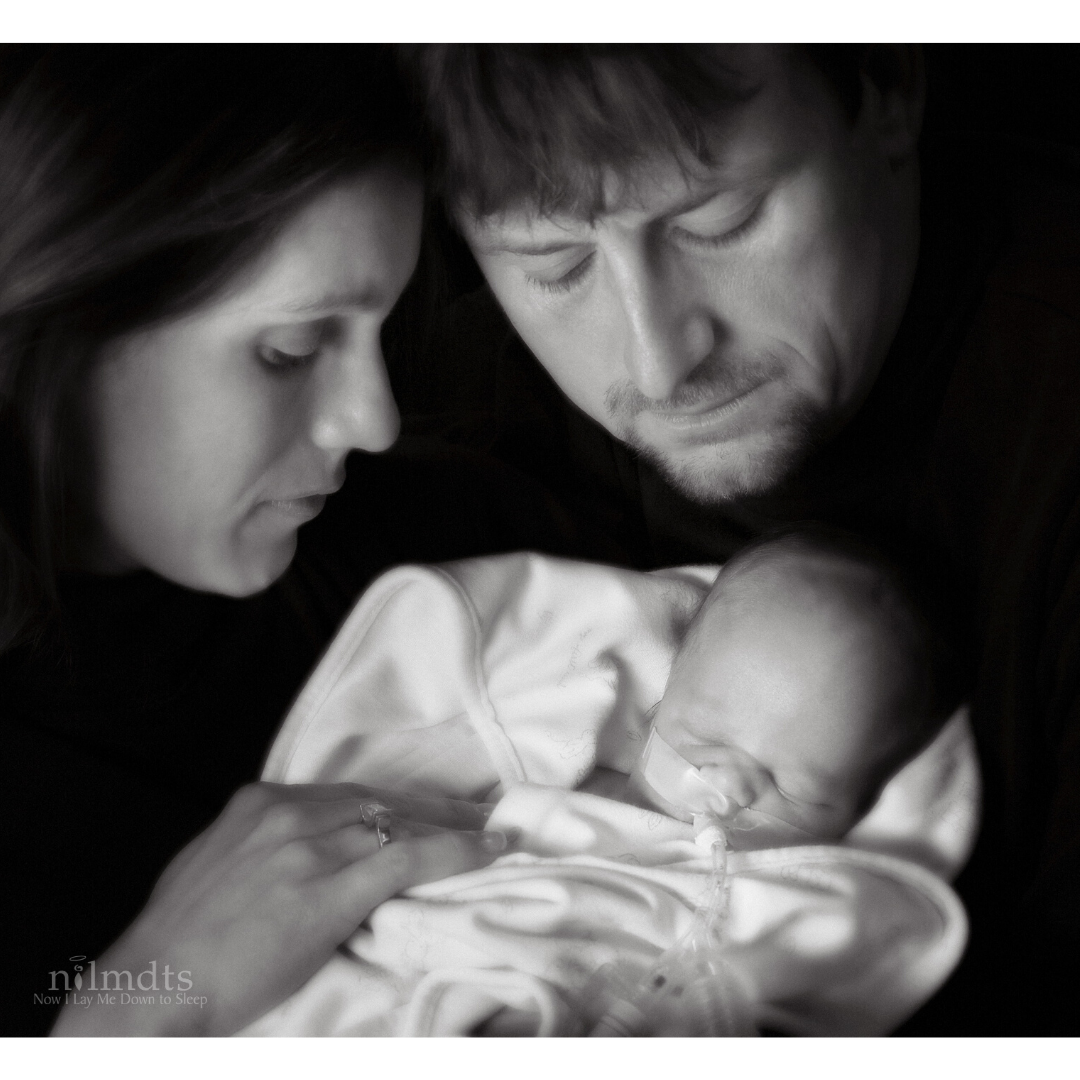