Skip to content
Why I Volunteer: Gordon Murray NILMDTS Photographer

In the summer of 1995, my wife and I where looking forward to the arrival of our fourth child, hoping this would be our long-awaited little girl.  We planned another homebirth, since everything was going smoothly, and decided to skip the ultrasound so that the sex would be a surprise.  But in the 31st week our midwife had some concerns with the measurements, so we scheduled an ultrasound just to be safe.

It seemed odd when our Ultrasound Technician excused herself to get her supervisor.  We were stunned to learn that our son had some “abnormalities” with further tests needed to determine if it was Downs or something more serious.  We checked into the hospital for further testing, but on the second day there our son passed as the result of a cord accident.  Later, we learned that a flat cord is a common symptom of Trisomy 18, which is usually a fatal condition before or shortly after birth.  Within five days we had gone from looking forward to a baby, to making plans for a funeral.

We named our son Peter, from the book of 1 Peter that speaks of hope in the middle of suffering.  Even though I was a professional photographer, I was so overwhelmed that it just never occurred to me to take any pictures – so we have one snapshot that was taken by my mother-in-law.

I became engrossed with my business and recovered faster than my wife.  She told our counselor that it felt as though we had both fallen out of a boat, and I climbed back – but instead of pulling her to safety, I was tossing her bricks.  It would take us three years to feel that life had settled into a new normal, and that our marriage was going to survive. 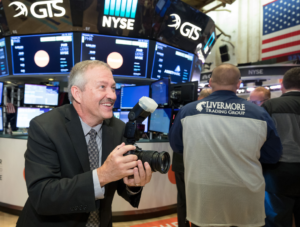 I clearly remember the first time I heard about Now I Lay Me Down to Sleep, I was reading a photography magazine article. As I read the article I thought, ” that has got to be the toughest kind of photography I can image.” But, as I thought about our experience of losing Peter and our struggle to recover, I realized that I was perfectly suited for this task.

I was still a little apprehensive when I attended the training in 2012, but then shadowed another photographer on my first call and realized that it wasn’t about me, and that I could do this.

Today I’m one of only a handful of NILMDTS photographers covering multiple hospitals in the metro Phoenix area, so I accept sessions once or twice a month as I’m able.

It seems to help the family when I mention that I have been through what they are experiencing.  I encourage them to accept help wherever it’s offered, and to be patient with well-meaning folks who don’t know what to say, or say the wrong thing.  The assignments aren’t easy, and there are sometimes tears.  But they are manageable, and I’m continually grateful to be a kind of first-responder for a family suffering the worst of times.

On June 24th I was invited to represent NILMDTS at an awareness fundraiser being sponsored by a couple who had been helped through their own loss.  Their testament was the perfect endorsement, so all I had to add was a request for volunteers.  Later that day, I realized that June 24th was the 24th anniversary of Peter’s passing.  How appropriate.  The toughest kind of photography I could imagine has become the most significant.

To learn more about becoming a NILMDTS photographer or to see a full list of volunteer opportunities, click here.