When my husband and I decided we wanted to start trying for a baby, our window of opportunity was small because he was leaving for a six month deployment soon. We tried and I tested….and tested and tested. Every pregnancy test was quickly coming back negative while his ship out date came closer. Before saying goodbye, I tested again and it came back negative…again. We chose to believe it wasn’t meant to be for now and we would try again in six months. Three days later, I started exhibiting some symptoms of early pregnancy. I messaged a friend who told me to take another pregnancy test NOW! I did and this time there was no doubt, two pink lines appeared. I took three more tests to be sure and all came back positive. The next day, I gathered items to ship to my husband to tell him I was expecting our first baby. We were over the moon with excitement. He literally jumped for joy. We chose not to find out the gender of the baby and referred to our little one as Boog (short for little booger).

It was a very uneventful, normal pregnancy. Both baby and I were healthy. My husband came home from his deployment when I was 30 weeks and 5 days along. Everything continued to follow what was thought to be a healthy pregnancy.

April 18, 2017: I went in for my routine check-up at 38 weeks and 3 days. I was exhausted and hoping to discover our baby was coming earthside soon. The night before, Boog kicked me so often and so hard that I barely slept. I went in and what had been a strong, steady heartbeat the week prior was now deafening silence. The midwife got an ultrasound for me right away, before telling me anything for certain, but I knew in my gut. I got off the table and with trembling hands, got dressed and walked down the hallway. I laid back down and saw the look in the eyes of the ultrasound tech and midwife when the room remained silent.   Upon arriving to the hospital after receiving the news of Boog’s death, Erik and I were asked a series of questions no parent ever considers. What funeral home would you like your baby to go to? Do you want your baby to be cremated or buried? Do you want professional photographs of your baby? These seemed impossible to answer because I didn’t want to. I didn’t want to believe this was it, the end of our sweet Boog.

It seemed strange to me that someone would want to take pictures of my baby, but it was also something I had never thought of. This would be the only opportunity I would ever have to get pictures taken of my son.

When the NILMDTS photographer arrived, she was very respectful and kind, offering condolences and hugs. She brought a wave of calm and allowed us to feel like normal parents for a little bit. She was graceful, considerate, and gentle, with us and with Boog. It was a spiritual experience for us. The pictures we received were beautiful and allow us to share our Boog with others, but most importantly, they are a constant gift to us, the only way we can see our Boogie bear. 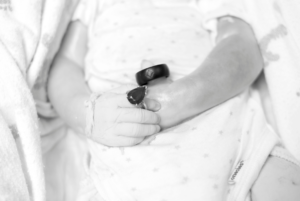 I will never be able to repay NILMDTS for this timeless, priceless gift they have given my family and me, but I do try. I often share Boog’s story and how these photos have helped to heal me.

Also, I make donations on Christmas and ask for donations on my birthday through Facebook Fundraisers ever since losing our Boog. This year for my birthday in October, I was able to collect $795 in donations for NILMDTS in honor of our son. It feels great to give back, even a little, whenever I can. The loss of a child is the worst pain one could experience, but NILMDTS provides comfort, tangible memories, and normalcy in the photographs they do selflessly take. I am forever thankful for them.

For more information on Facebook Fundraisers and other ways to honor your baby while giving back to NILMDTS visit the link below: