I could never fathom the importance of photographs until it was the only thing left of him. I especially would never have dreamed that it would be part of our silver lining in a story that would bring as much joy as it would grief.

After a long battle with infertility and miscarriages, my husband and I welcomed our 36-week twin boys, Eli & Walker, into this world. And in that same week, we would learn our little Eli was diagnosed with a very serious birth defect that would land us in a position to make a life or death decision for our first-born baby boy. After much prayer, we chose life – for 2 other children. He would be scheduled to become a neonatal heart valve donor. After he was removed from life support, within a blink of an eye, he was gone.

And we were left with the photos. 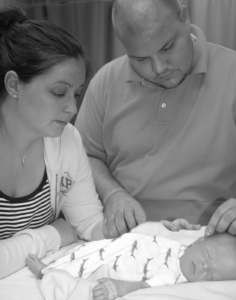 Four years later, Eli was selected as the donor representative for ARORA (Arkansas Regional Organ Recovery Agency) Donate Life parade flat for the Tournament of Roses in Pasadena, CA. When my husband and I received the news, the one thought that occurred to me was how grateful I was for the countless photographs our NILMDTS photographer, Tricia Kauffman, had captured for us the night Eli was removed from life support. We had so many to choose from!

We flew into Pasadena just days ahead of the New Year’s Day event to join with the other donor families represented. To be able to hold and smell Eli’s “Floragraph” from the float was such a special memory for us, as everything on the Tournament of Roses floats must be made of natural resources. 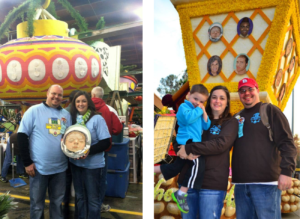 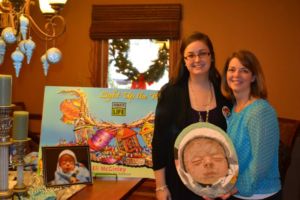 Eli’s floragraph was made of crushed hydrangea, cinnamon, and onion just to name a few. Volunteer artists including Eli’s artist, Matthew Mugica, were flown in from around the country to create these floragraphs of organ & tissue donors.  And although we never had the privilege of meeting Matthew in person, like Tricia, he will forever impact our lives. Like NILMDTS volunteers, it takes a very special partnership to create these for grieving families. 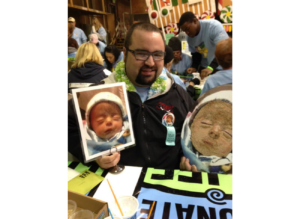 The morning of the Tournament of Roses Parade, Donate Life American had a section of very tall stadium stand seating reserved for the donor families whose loved ones had floragraphs on the float. I can tell you as a little girl who grew up watching the Rose Parade on the television, absolutely nothing can compare to seeing this parade in person. It was life changing. When we first laid eyes on the Donate Life float coming toward us on Colorado Boulevard with Eli’s floragraph front and center, it solidified the importance of those photos, the volunteers, the time. 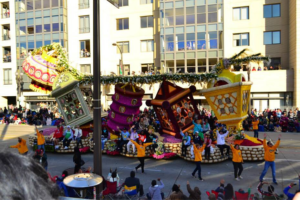 In honor of his recipients Cambrie & Luis.

Special Thanks to our NILMDTS photographer Tricia Kauffman