My husband and I started to talk about children before we were married and we both agreed we wanted to be parents. After a year with no luck we sought out help from a fertility clinic. On September 19, 2018 we transferred 2 embryos and crossed our fingers. On the afternoon of our 2nd wedding anniversary we got the call. We were pregnant! We were over the moon! I was elated at the first ultrasound several weeks later to hear our son’s precious heartbeat. My pregnancy progressed without any complications. Not even a hint of morning sickness. How lucky were we?! I remember turning to my husband after many appointments and saying, “Wow, I can’t believe we’re still pregnant!” With infertility, you sort of live in worst-case scenarios, always waiting for the other shoe to drop. And on Tuesday, April 16th it did.

That day started like any other. I went to work and at lunch I walked to my car to head to the doctor’s office. I sat in my car and it hit me that I hadn’t felt Dylan move that day. Maybe I was just so busy or maybe he was just getting too crowded. I was 32 weeks and 3 days. I wasn’t too worried. I would tell the doctor and everything would be fine. We were passed the 12 week mark, so everything would be fine, right? I was so naive.

The doctor began the ultrasound and I knew. I knew but I couldn’t speak. I knew where the heartbeat should be on the screen. I knew it wasn’t there. The doctor told us to go across the hall so he could use a better machine. I don’t know how I made it off that table and on to the next one. I wasn’t breathing. This isn’t happening. I could tell my husband had no idea. And then my doctor said the words that will haunt me for the rest of my life, “So there’s no heartbeat.” The next bit is all a blur. I could have been induced that day but I said no. I wasn’t ready. I needed more time with him in my belly where he belonged. I needed to get out of that room. I felt like I was drowning.

Thursday morning we checked in to the hospital. I remember turning my back as I began to cry at the nurse’s station. I was sure they had no idea why I was there or what was happening and I didn’t want to make a scene. I couldn’t have been more wrong. The nurses were amazing and took such incredible care of us. I labored for 24 hours. I didn’t want anyone to look at the monitor or talk about the intensity of my contractions. I had read every book on giving birth and I was excited to labor. But not like this. The contractions were a cruel reminder that there would be no reward at the end of this pain. At 8:52am on Good Friday, April 19th Dylan Christopher was born silently. Exactly 7 months after he was gently placed in my belly to grow. He was 3lbs 14oz and 18in long. He had a full head of hair and the most precious tiny ears. He was perfect.

Before we went to the hospital to deliver Dylan, another angel mama reached out to me and let me know that there was an organization that would take photos for us, free of charge. She told me to let them take the pictures and if I never wanted to see them that was ok but she was pretty sure I would want them. She couldn’t have been more right. 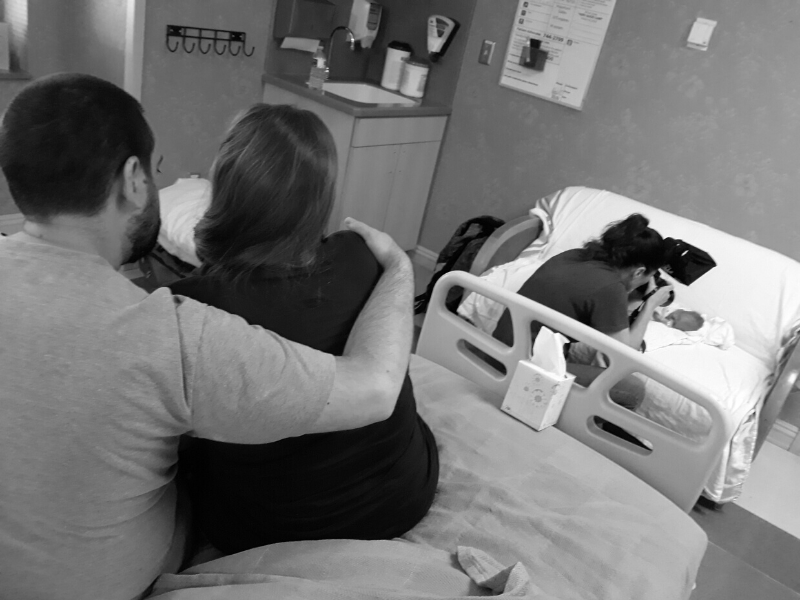 Our photographer, Kelli Marone, captured images of our son I will cherish for the rest of my life. As soon as Kelli sent them to us, I opened them immediately and not a day has passed that I don’t look at those photos of my sweet baby. I’ve printed many of them for Dylan’s baby book, for my desk at work and around the house. I was given a code to make a beautiful photo book with all of the images as well.

I’ve been able to share his precious face and tiny features with friends and family that were not able to meet him.

Kelli was so kind and so gentle with us during that horrible day. She worked with the nurse to make sure everything was just right, which was something I wasn’t able to do in my time of initial grief and loss. She took one photo in particular where Dylan is holding an angel wing necklace, which I now wear everyday. That photo hangs in his nursery and makes me feel a little bit closer to him on my saddest days. I am so thankful there is an organization of incredible volunteers that share their time and talents to help families like mine in their darkest hour.

I don’t recall saying thank you to Kelli that day, so I would like to extend my heartfelt gratitude to her now. Thank you will never be enough for the gift you’ve given us.