Nathan and I hear a lot that time heals all wounds. Fortunately for them, they have not lost a child. I would never want anyone to have to go through that pain. But at the same time, I really don’t want this pain to ever go away.

Feeling this pain is a reminder of how much that little girl meant to us.

On January 29, 2016 we were headed to our baby’s anatomy appointment. This was our first child and on both sides of our family, there were only boys. The very next day we had a gender reveal party planned! In no way was I worried that anything would be wrong. After all, I had done everything right. I had never done drugs, I went to college, I exercised regularly, and kept myself healthy.

The ultrasound tech came in to scan but told us the baby wasn’t in a good position to see the gender. She asked me to move around a little bit while she got the doctor. We waited and waited. The entire time I still didn’t think anything was wrong. I was just worried about not being able to tell everyone the gender the next day.

When the doctor came in our whole world changed. She said there was a lot of fluid in our baby’s brain and that part of the brain didn’t look normal. Nathan and I just looked at each other. They asked us if we were going to consider abortion. We said we were not and after that, they never asked us again.

We appreciate that to this day. Once we said we were not going to abort our precious baby they asked us if we wanted to know the gender. Yes!! It’s a girl!! During that entire time, Nathan and I stayed strong. We hadn’t cried until they said it was a little girl.

After we left the doctor’s office we saw a beat-up pick up truck with a license plate that said BELIEVE.

We knew that was God speaking to us. So we trusted in Him and we prayed. Fast forward to 32 weeks and after another MRI and ultrasound, we finally had a diagnosis. Rhombencephalosynapsis with severe hydrocephalus. The doctors said Maggie might not be able to breathe once she was born. If she was able to breathe she may not be able to swallow. And if Maggie made it through all that she would have severe mental retardation.

They set us up with hospice and an organization called Isaiah’s Promise who then contacted Now I Lay Me Down to Sleep. Everything was ready for our little girl and most important for us was the pictures. I needed these keepsakes of my little girl!

On May 25, 2016, with the waiting room crowded with loved ones, Maggie Elizabeth Carder was born! She was yelling even before she was outside my belly (c-section). That was a beautiful sound because if she was yelling, she was breathing. Nathan held her first and the way he looked at her made me fall for him even more. We had no idea how long we were going to have her. After everything settled down the photographer for NILMDTS arrived.

He took beautiful pictures of our little family. 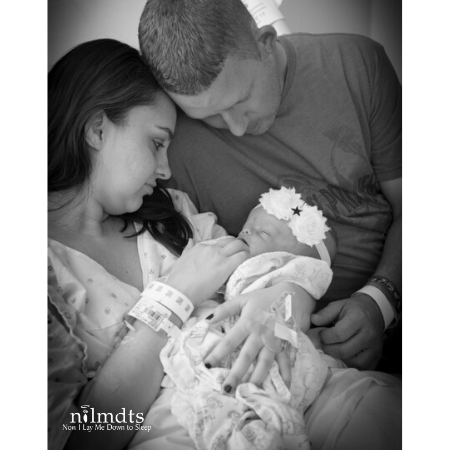 Maggie could swallow but she couldn’t latch so we fed her with syringes. Three different times those first couple weeks Maggie stopped breathing, but each time she started again. Hospice came and went and at one time we thought for sure she wasn’t going to make it long. We called our family in to hold her. After everyone left Nathan and I looked at each other and said we were not going to accept this, our family was going to fight.

Nathan and I took shifts and stayed up all hours to make sure Maggie had every swallow of milk she would take. A month later Maggie was still here. Fast forward to January 3, 2017, and Maggie was finally strong enough to have a VP shunt to reduce the fluid in her brain. After that Maggie flourished!

She graduated from hospice in April 2017, she went to the beach twice, and she watched the Cleveland Indians go to the World Series! They even called it Believeland! We took it as another sign we were on the right path. She loved going to aquariums and went to Camp Gizmo for special needs families. Maggie went to church and prayed with her family. 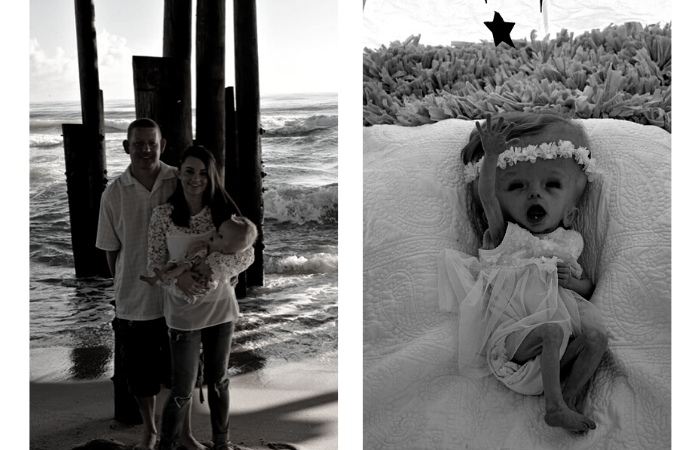 Unfortunately for us, God needed her, and on June 1, 2019, she went home to heaven. It was very unexpected. Her brother Noah was born 4 days later. They never got to meet.

I know Maggie’s story is a little different than a lot of the stories NILMDTS hears. But NILMDTS and other organizations helped us so much. Those 3 years and 7 days were the best and we would do it all over again in a heartbeat.

Give the gift of remembrance to future bereaved families 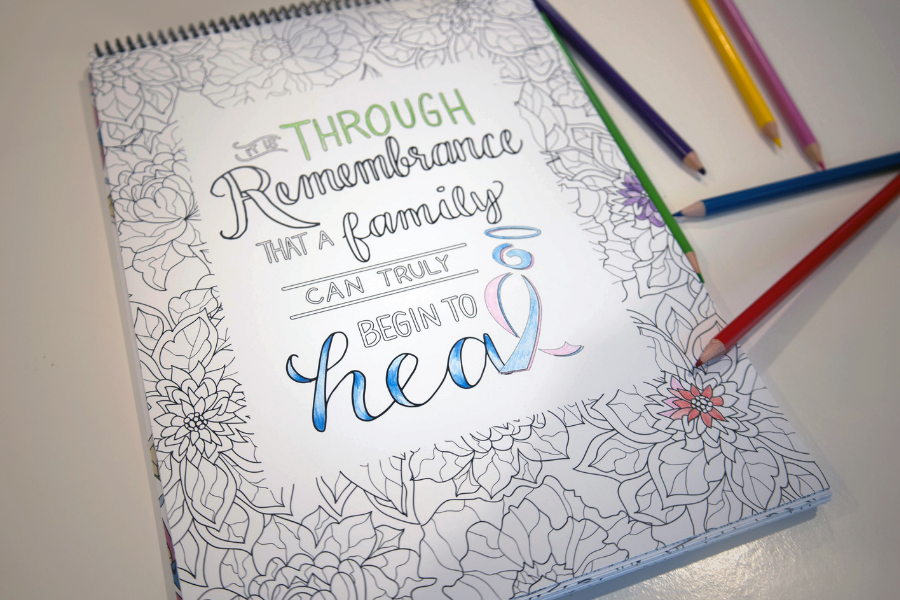 Give the Gift of Remembrance
Donate Today 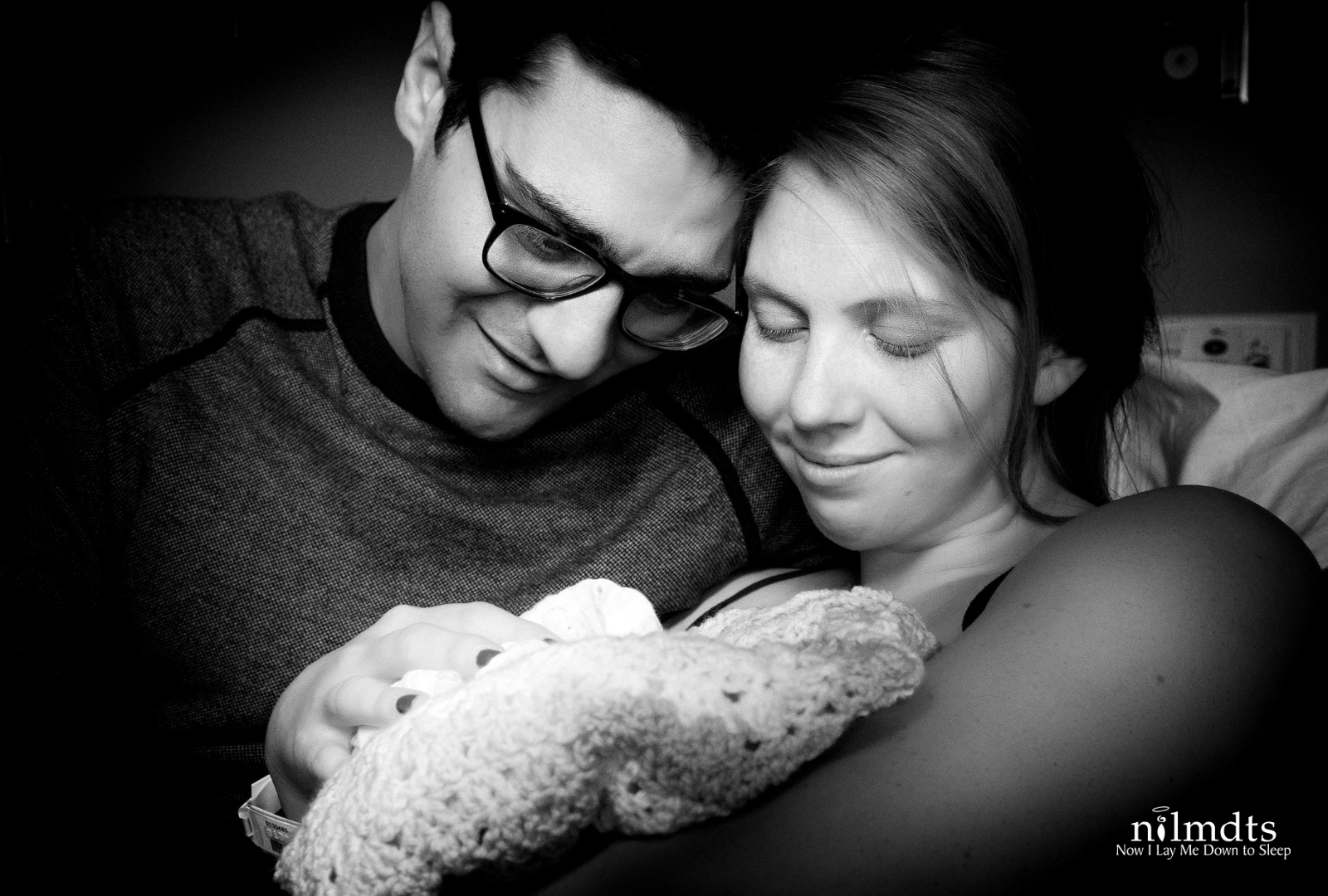